In 2005, a foodie soldier formed a small army – Kayal Army - of people who love and care about healthy eating and traditional cuisine. In a splash of time they proved that there is an opportunity to success if you can deliver healthy food with fresh ingredients at a pleasant atmosphere. Kayal wrote in the history of Restaurant Industry of UK that any forms of economic and industrial downfalls cannot harm an institution which is run by passionate professionals.

Kayal – The first authentic Kerala seafood speciality – has become the most popular of its kind to the people of Britain and this family run group of restaurant has become a favourite with dedication and passion for good food. Numerous awards and recognitions proved them distinctive to the normal fellow restaurants. ‘Healthiest Restaurant Award’ proved that Kayal do care about healthy food. Kayal is all about tradition, qualities, discoveries, fresh ingredients and aromas.

Recently ‘Hairy Bikers’ – Simon King and Dave Myers’ put their hands down in to authentic Kerala cooking by making ‘Masala Dosa’ with the help of Kayal brigade. ‘Athidhi Devo Bhava’ – which in Sanskrit means Guest is God and that, is the motto of Kayal Army and they try everything possible to live up to it.

The God's Own Country

Sandwiched between the Western Ghats on the east, and the Arabian Sea on the West, Kerala is one of the beautiful states in India. A tropical paradise of waving palms and wide sandy beaches, this thin strip of coastal territory slopes down from the mountain ghats in a cascade of lush green vegetation. Kerala, a paradise where land, sea and sky, come together in a union of elements. With the Arabian Sea in the west, the Western Ghats towering 500-2700 m in the east and networked by forty four rivers, Kerala enjoys unique geographical features that have made it one of the most sought after tourist destinations in Asia.

The Kerala backwaters are one of the most favoured tourist attractions. The calm and serene blue backwaters of Kerala provide with an unforgettable travel experience. 'God's Own Country', Kerala, has a very long and complex structure of this waterbody called backwaters. Kerala is known for its panoramic backwater stretches, lush green paddy fields, highlands and beaches. The gorgeous green of the fringed palms ripple in the blue waters and blend into wavelets. The serene lakes come alive during Onam with a spectacular water regatta-the snake boat races. It is indeed amazing to watch oarsmen, at least a hundred in one boat, slice their way through the waters to the rhythm of their own full throated singing.

Fish (called meen) appears on the tables of all but vegetarians in Kerala. With its long coastline and many inland waterways (more than 1,000 miles), Kerala is one of the top producers of fish in India. At every waterfront location fresh fish is available every day. None are more spectacular than the "Chinese" fishing nets at the port of Cochin. Fish are usually cooked in clay pots with sauce (curry), but are also delicious when baked or steamed in banana leaves. A special fruit called kokum or "fish tamarind" is used in many preparations because the acid in it is said to counteract the unpleasant flavors that rise from fish. Shrimp, clams and mussels are also commonly eaten, especially in a baked rice dish called biriyani.

MIT PATEL says
Food took over 30 min which is not really good service we order masala dosa appam and few other stuff .we would never want to visit again

An authentic Kerala 'chayakkada's (tea shop) special high tea snacks which are freshly made and displayed in glass cupboards for the afternoon tea break and to munch during the church or temple festive moments. The home made chutney, lemon pickle and mango pickles are the unique accompaniments.

This crunchy, crispy snack is made from rice flour, coconut, black sesame seeds and cumin seeds are shaped to star or flower in Seva Nazhy (traditional Kerala die vessel)

Pappadoms are dipped in a special batter of rice flour, cumin and sesame seeds and deep fried in oil to give a special aroma.

Plain, flat, thin, crispy snacks made from black gram lentils and rice and are cut in to triangular pieces.

Kayal Soup is one of the most spectacular soups made by the fishermen family of Kerala. This soup is made of mixed seafood, flavoured with coconut milk, cumin seed, curry leaves and crushed pepper and tempered with mustard.

Muringakah (drumstick) is well known for its medicinal quality in Ayurveda. It is prepared from drumsticks, potato flavoured with shallots, garlic, ginger and curry leaves with special care.

Banana boli is the one of the unavoidable snack for the people in Kerala during their tea break. Banana slices are dipped in a batter of rice and plain flour, crispy fried. It is served with chutney.

Delicious golden fried lentil doughnuts, fluffy in the middle and crispy on the outside

One of the most attracting snacks from the village bakeries. Tasty Chicken filling in puff pastry served with salad and chutney

Your choice of lamb/chicken cubes cooked with onions, black pepper, ginger and green chillies to give a spicy touch. Our father Thommans favourite, to go with his drinks

A Bakel Fort Beach memory at the shack:- Prawns marinated in a spicy paste of chillies, onions fried and served with chutneys.

Dosa is made from a mixture of soaked lentil and rice, ground together and fermented overnight. All dosas are accompanied with sambar and chutneys.

This is perhaps the most famous South Indian Brahmin dish. A rice and lentil pancake with a traditional filling of seasoned potatoes, onions and peas.

Uttappams are similar to dosas, and are made from lentils and rice fermented overnight. But they are cooked on both sides and come with mixed vegetable toppings.

Alappuzha, the Venice of the east, is very popular in its kind of seafood culinary arts. A thrilling prawn dish cooked in a thick sauce with coconut, ginger, curry leaves and onions.

Believed to been found by Portuguese sailors using the locally available ingredients in Kerala. Fresh crab with shell cooked in a coconut flavored sauce with authentic spices.

Kallu shaps (toddy shops) are the local pubs in all over Kerala. Every one including the families visit these pubs mainly to enjoy the Kappayum Meenum, though many of them do not drink alcohol. The fish curry is made with garlic paste, onions and red chillies and seasoned with mustard seeds, curry leaves and served with cassava (tapioca).

One of the most famous dishes in Travancore area of Kerala. Boneless chicken cooked in a black pepper based sauce with onion, ginger, garlic, turmeric, and cashew nuts.

This is one of the exotic dish hailing from the Great Malabar coast of Kerala. These are small rice dumplings that are steam cooked and then added to a chicken curry made of special Keralan spices.

Traditionally in Kerala the Muslims served Biriyani on all important occasions. Malabar coast of Kerala is a treasure house of biriyanies. Over the years it has become of very popular with other communities in Kerala. Rice and chicken are baked in rich gravy to produce a highly aromatic and deliciously spicy preparation.

Pala Beef Chops (where its known as beef chaps)

Fresh spinach and toor dal cooked in a thick garlic sauce, and tomatoes flavoured with curry leaves and tempered with mustard seeds.

Potatoes, peas and peppers stir fried with onions and tomatoes.

Fresh vegetables cooked in a creamy sauce of roasted cashew nuts and coconut.

Spinach and potato tempered with garlic, onion and other spices.

The typical feast served as a three course meal starting with the soup. Followed by a neatly arranged little bowls of either non-vegetarian/vegetarian curries, side dishes, bread, and rice along the circumference in a large plate, and the dessert as a final course which is a complete all-in-one package meal thats a favourite with Indians anywhere.

Panchamrutham consists of five secret ingredients and it is the divine prasadam made for many pujas and festive occasions.

Another conventional pudding made of vermicelli, milk, ghee and garnished with cashew nuts and sultanas.

A traditional pudding made from semolina cooked with pineapple, butter and studded with raisins and cashew nuts topped with an ice cream.

Delicious, smooth Indian ice-cream made with flavour of Mango/Pistachio. 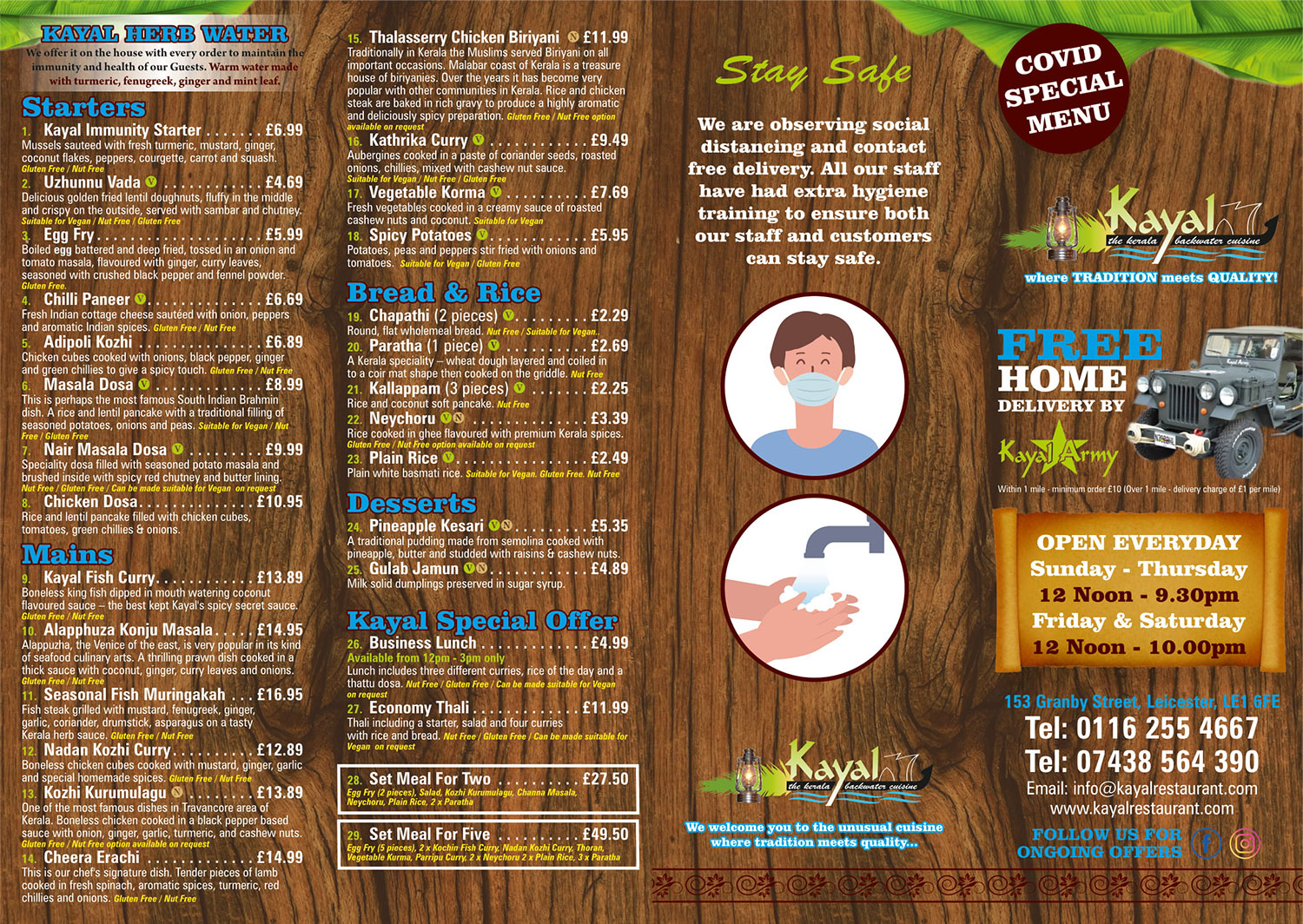